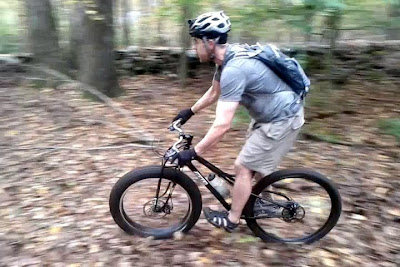 Observations/Information: Went in to take care of the new blowdowns at the Wetspot, the Cleavage, and the Blue Ball Roller. 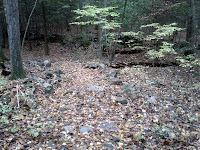 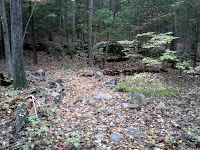 The best line, which is the most difficult, was obstructed by some oak branches that I had to cut with a bow saw. I took care of the sapling that probably throws people off all the time and put in some more flat rocks. 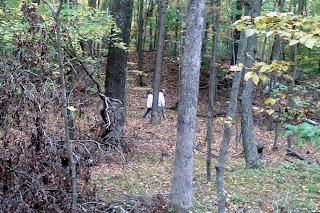 There was a new blowdown on top of the old one from Snotober. I took care of both. A couple walked by, out for a morning stroll in the woods, each with their iPods on. 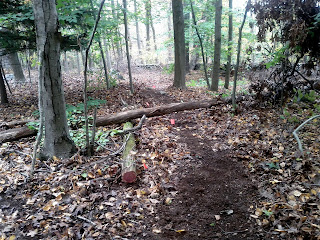 Someone got to the Cleavage before me (thank you) which was the impetus for me coming out there in the first place and seeing that was squared away I set about to adding a by pass route to Cleavage. 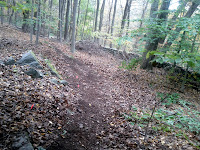 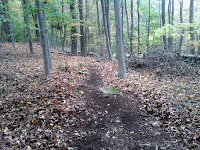 The curve that comes down and lines you up to ride up through the Cleavage is too sharp and when I come around there I sometimes dish out in the curve. I extended the roll out past the Cleavage with a small climb that meets back up with the main trail. 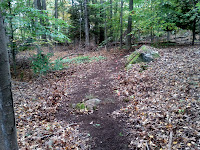 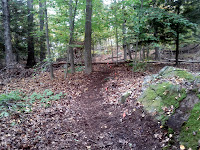 There was this guy, Jason, on a Jeff Jones Fat Bike that I met before and I asked him to ride it both ways and he said it was great, especially at the curve where he washes out all the time.

He then showed me how to roll this rock that I thought riders might want to bank off of.

I benched the slopped section and hope to go back in a few days to finish removing the duff on the flat section of the trail.

I left the up-and-over but it needs some logs on both sides to make a better ramp.