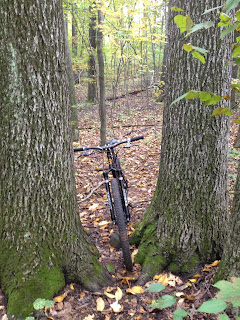 Observations/Information: I hit up Wadsworth Falls Saturday afternoon. I wanted to get a ride in before the weather system that forced postponement of the Fall Fiesta got here. It was well on its way as I unloaded, there was a strong wind blowing the front in. It was still warm and muggy when I started but the temps dropped about 20 degrees during my 1 ¼ hour ride and the clouds rolled in too.

The trails were in good shape, although there are a lot of leaves already down, and they can make the trails a little bit hard to follow in places. Some of the unblazed and little used trails are being opened up again. One of these trails is off of Taco Bell, at the far northern end, by the grass clippings. It's a short but fun and flowy trail that winds down to the orange road and goes between two closely spaced trees as it does (see photo). The trail has been there for a long time but is usually not maintained. Someone has cleared it and it is now rideable again.

There were a lot of people using the trails, per usual on a weekend.
The weather for next week looks good and I'll be leading a ride at Wadsworth Falls Wednesday at 4:30. We'll swing by the lot at 5:00 to pick up stragglers. Meet in the main lot on Rt. 157. Be ready to ride at 4:30.