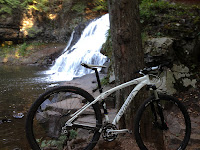 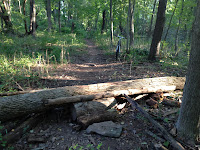 Date: September 12, 2012
Report Type: TA Report:
Trail Name: Wadsworth Falls SP
Town: Middletown/Rockfall
Trail Conditions: Very good, dry
Observations/Information: A quick ride at Wadsworth on a mild, dry, and sunny afternoon found the trails to be busy with users enjoying them in a multitude of ways, all of them legitimate. The trails were in excellent condition overall and not badly overgrown. This is in stark contrast to my last visit, in June, when the war between animal and vegetable was tilting toward the vegetables and the trails were badly overgrown with thorns and brambles. They have either receeded on their own or someone has cut them back- thanks to whomever might have done that. There were other signs of maintenance as well, such as tree clearing and ramping of fallen logs.

Trails are all clear except that short side trail to the school in Rockfall. The unmarked singletrack between the red and yellow trails is passable but sketchy. The trail surface is still a little messed up below the gravity cavity. There's a new tree across the Taco Bell (now blazed yellow) trail. It's a large tree that has been ramped (see photo). There's no way around. Trails on the Rockfall side have apparently been reblazed. I cleared a dead limb that was jutting into that same trail. There is a tree half fallen at the bottom of the red carriage road, just above the intersection with the orange trail. The trunk is high enough to ride under but the limbs are hanging down ready to face mask the unaware, so be on the lookout for it.
Trail Ambassador Name: Glenn Vernes