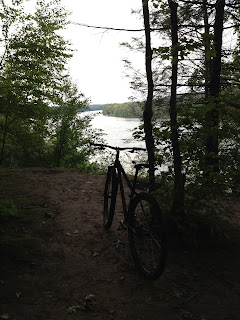 Date: September 14, 2012
Report Type: TA Report:
Trail Name: River Highlands State Park
Town: Cromwell
Trail Conditions: Good
Observations/Information: I took a ride at the Blow Hole Friday late afternoon. As I unloaded there were three other riders unloading as well, one guy local and two others coming all the way from South Windsor. They said they learned about the park after being directed to this website on a Google search. I agreed to show them the Sidewinder reroute. They all thought it was cool, and they also liked my singlespeed, so the ride started on a positive note. There overall opinion of the park and the trails the chapter has built were positive, and they all said they'd come back again.

During my ride I encountered three more riders as well. There were so many riders you had to pay attention to what was coming in the opposite direction. This place is no longer just a hot spot for those in the know. The trails are holding up well to the increased use, and some of the formerly little used trails, such as the red trail, are getting more use. There is evidence of trail maintenance- the green trail along the railroad tracks, which is usually overgrown with briars this time of year, has been trimmed. Thanks to whomever did that. I've also seen ramping of logs- the type of stuff only mountain bikers or trail gnomes would do. Chicken lines and freelance reroutes are still a problem. Still a tree accross the yellow trail, just below the second benching.

The Blow Hole would be a good place to ride this weekend, just watch out for opposing traffic.
Trail Ambassador Name: Glenn Vernes