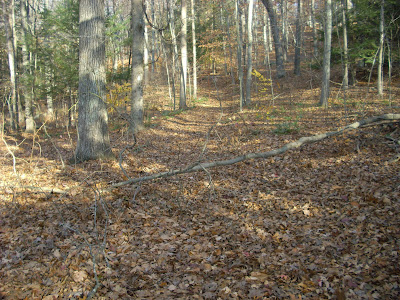 A little tree blocking the Jeep trail
Date: 2010-10-31
Condition of the trail: Crunchy

Observations: The Upper Gussy trail at Upper Paugussett State Forest is barely discernable with all the leaves down. I have been meaning to blaze the trail but just haven't gotten around to it but now that it's an official state trail, well it's always been official but it now shows up on the official State map, I think I better get work on that.  On the way in I came across a small tree blocking the Jeep Road and thought that it might make a good deterrent should an ATV get into this side of the forest so I piled up more branches and opened it up on the side.  See how long it lasts. 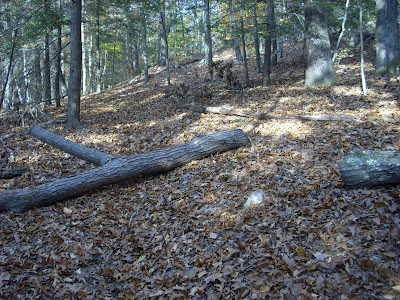 Further up the trail I found that someone moved the log that Paula cut so you don't have to do the log as an up and over and rather you can ride around it.  That's really no big deal because eventually I am going to move the logs and make skinnies out of them.  I also enhanced a minor up-and-over with a new rock that now rolls much sweeter, now. 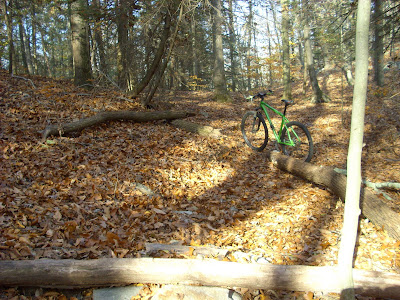 But here is something that I don't understand.  Someone moved one of the logs at this up-and-over.  It was moved into a spot that forms a choke point that then sets you up perfectly to roll the obstacle but who ever did this, I don't think it was their intention.  I think they were trying to make the up-and-over easier.  This appears to be the first case of dumbing down the trail that I have seen.  I enhanced the choke point a little more which lines you up perfectly for the up-and-over.  I will have to keep an eye an out for any additional dumbing down along the trail.