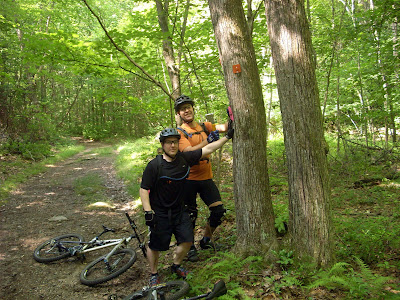 Observations: Went out and marked the beginner trail first thing in the morning. Turns out I missed a turn and new I had to go back and fix that but I only had an hour before other people showed up to help with the marking the other routes.
Back at the lot, only Javier and Vince showed up so seeing that we didn't have all day to mark trails, we decided they would do the intermediate route and we would rely on the ride leaders for the longer rides. Struck up a conversation with two guys decked out in full GT regalia both riding some bling/bling carbon fiber, full susser rigs and told them about how Cycling Sports Group was supposed to bring demos tomorrow but someone on their end dropped the ball and they are not comming. Well, these guys said they would swing buy and drop off some swag.
Javier and Vince took off and started marking the intermediate trail with pink signs and I went back to fix the trail I set earlier this morning. I caught back up with them at the intersection of the red and blue trails where they were talking to this guy named Chris. I offered to show Chris around and promised him some singletrack that he probably hasn't ever ridden before. 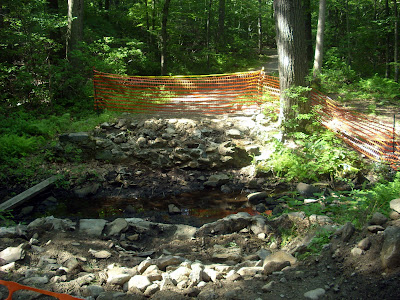 Bridge out on the South Pond Access Road. There is, however, a go around with a board walk to get over. 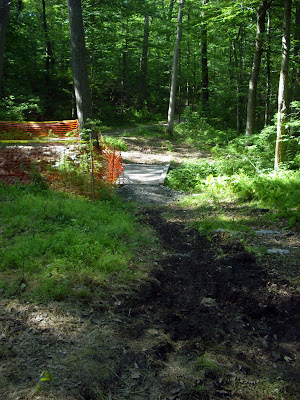 Mark,
Thanks for the tour today.
I am looking forward to another ride on Sunday. Here are some photos I took in Huntington earlier this month.
Chris