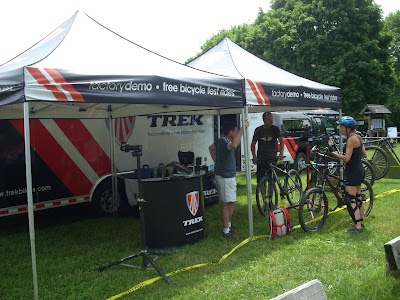 This year's Happening at Huntington was a resounding success!  There was not just one demo truck, but two!  We originally planned on having Trek but a last minute addition to the event was Shimano who was show casing their equipment on a plethora of different bikes including 29ers and 26ers, full suspension, hard tails, and even a geared rigid bike.  If you recall last year's event we had a big let down from a neighboring bike manufacturing company who said they were going to bring their demo truck and then 5 days before the event notified us that they weren't coming.
Well, this year's event more than made up for it, and for me after demoing two really nice bikes I think there might be a carbon fiber Fisher 29er with Shimano gears in my future!  Especially since Trek guaranty's their Carbon Fiber frames for life!  That's outstanding and definitely something worth considering for the next frame purchase. 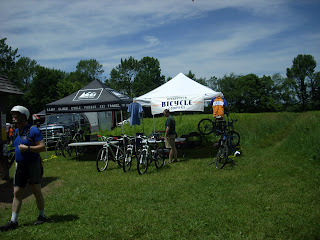 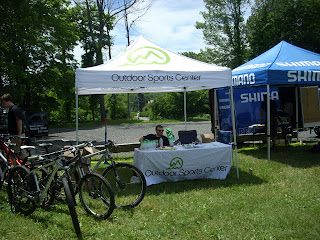 If you didn't try a demo, I hope you got some of the free swag that was available.  There were water bottle galore and energy snacks from Powerbar that were donated, too.


Talk about rides!  There were at least 8 different led rides hitting some of the finest single track that Northern Fairfield County has to offer, including a skills ride led by ..... of the Campmor Racing Team.  I saw more people riding the trails on Sunday than I ever have during past events.  Whether or not they were out riding for our event it was amazing to see how many people were using the park.  And being Father's Day, it was especially heart warming to see Fathers with their Sons and Daughters mountain biking in the park! 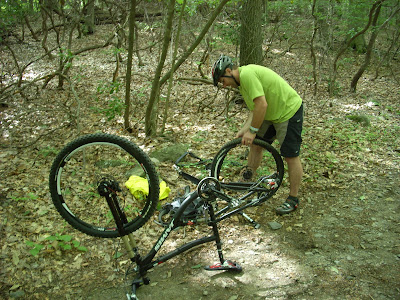 I played sweep on an intermediate ride led by Javier Hernandez that hit single track trails in South Pond, the Big Burn, and the Twisties.  Of course, it wouldn't be a CT NEMBA ride without at least one mechanical.  Steve Eldridge is pictured above fixing a flat on his new 650b Full Susser from Jamis.  Unfortunately for Steve, he got another flat shortly there after so there must have been a thorn sticking through his tire that he missed.  I guess he figured out what was going on because as we were climbing back up the last hill to the event I saw him flying down the hill all smiles! 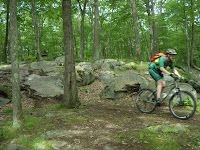 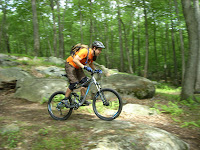 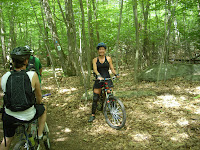 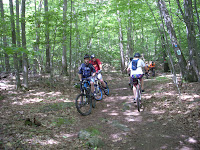 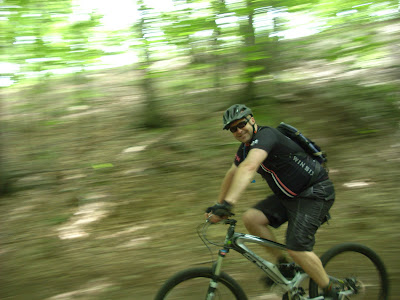 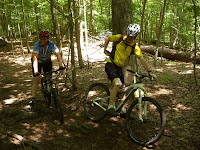 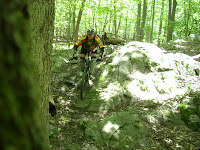