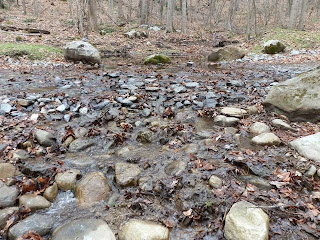 Observations/Information: I did a loop hike around the reservoirs. The track from a previous year is here. http://connect.garmin.com/modern/activity/440014994.

With the recent heavy rains, many trails were more like running streambeds. The trail down to the waterfall north of Reservoir 4 sustained heavy erosion, making an already bad situation even worse. That trail is definitely not rideable. 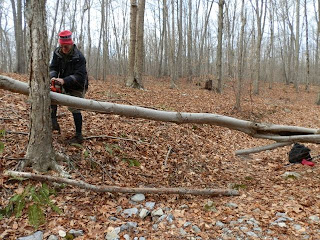 Along the way, I nipped some overhanging branches here and there. A friend had brought his electric chainsaw and cleared the birch tree that was blocking the woods road north of Reservoir 2.
We noticed the pile of culverts by the entrance off Rt. 42, and noticed they were replaced by rocky stream crossings. We did not like having to wade through the water.

This was the reply I received from Jerry Milne, state forester, "The culverts were originally installed by the water company. They were severely undersized for the size of the watershed they served. They used water main pipes that were way too small, so they would easily clog. They washed out, and the water would be diverted down the road, or over the road, washing out the road also. The fords are designed to need less maintenance. The water runs over the riprap at the stream crossing. I've walked over them when water is running with no problem."

A fellow hiker who happens to be a professional engineer said the state could have left the culverts in place and added the rocks as a backup when the water flow was too great. I like that idea. I also suggested to Jerry Milne that it would have been good if the state had dug some trenches in the riprap to channel the water when it flows less and then hikers could step on dry ground in between.
We did notice that some of the woods roads had fresh gravel on them, which we appreciated. Others continue to be heavily eroded with very uneven footing.

I sent a photo with a locator map to Nate Hale, the state park supervisor, regarding the Camaro near Reservoir 4, and asked if the state could get it out of there when the ground freezes. The pickup truck by Reservoir 2 was taken out a year or 2 ago, but we did see the plastic bed remaining. I picked up a bucket's worth of litter along the trails and near the parking area. I need to get back there and cut the bittersweet vines by the parking lot which are 2 to 3 inches in diameter.