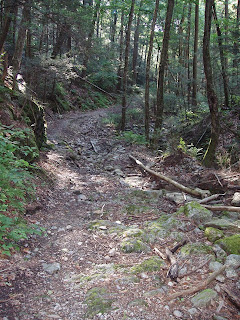 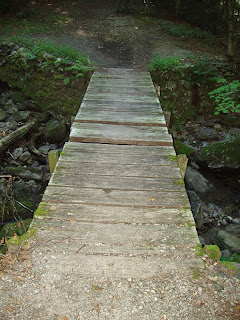 This morning I took the power line trail from the Chestnut Tree Hill/Reservoir 4 lot north to the branch that meets the fire road in the vicinity of the beaver pond. (Actually, I headed up the street and entered the power line trail directly at the gate. The trail on the west side of Res 4 up to the power lines is bramble city.)

The power line trail has many patches of large, sharp stone (which proved to be the last nail in the coffin of my old tires on a ride there a few weeks ago). A couple of these were too much, and as I didn't want to wreck the snazzy new Kendas, I walked those. (Also walked the steep hill.)

Took the fire road all the way down to its terminus at Black Forest Road (which is presently being worked on, though there was no evidence of construction at that end). The lower end of the fire road (between the last of the three doubletrack southbound branches, and Black Forest) has some significant washout. The little bridge over the brook towards the bottom has a few loose planks.

Returned up the fire road to the westernmost of the southbound doubletrack to the trail that zig-zags under the east-west power lines. Nice in spots, very rough+steep in others. Eventually met the trail south to Res 2 (very pleasant ride), then made the loop around and headed back up the trail to the east of Res 3 back to the parking lot. 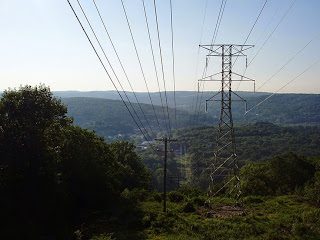 Conditions were relatively dry, with a few mucky spots here and there (in the places that are usually mucky). Bugs weren't as bad as they had been (but still annoying in the moister places). Performed some minor trail maintenance (branch trimming, removing a couple of small blowdowns across the trail). Some evidence of motorized use (though some of that under the power lines could be power co. ROW maintenance).