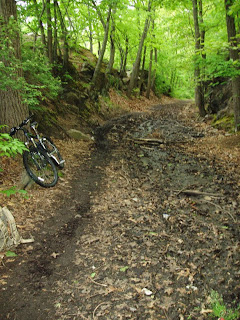 Date: 5/19/2013
Report Type: TA Report:
Trail Name: Larkin State Bridle Trail
Town: Naugatuck/Middlebury/Oxford/Southbury
Trail Conditions: Good (mostly)
Observations/Information: Rode end to end and back (actually started/ended near midpoint @ the Riggs Street crossing). Light drizzle (hey - that's what GoreTex is for), encountered a couple joggers and dog-walkers, but no other bikes or horses (though there was plenty of, um, evidence of equestrian use). Some evidence of motorbike activity, especially at the Naugatuck end.

Trail condition is good for the most part. Just in from the Naugatuck terminus @ Route 63 there's a large mucky patch that has been repeatedly ridden through. 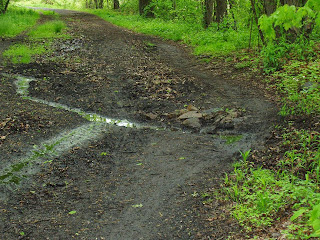 The segment in Oxford between the Towantic Hill Road and Longmeadow Road crossings is still closed (private property), necessitating a detour onto those two roads. (This I confirmed with DEEP.) Towantic, in particular, is steep and curvy (with horrible sightlines) and heavily traveled, so use caution. 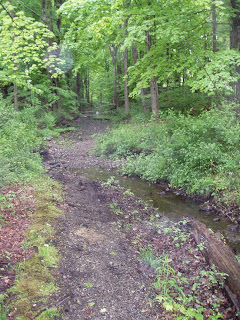 The segment in Southbury between Route 67 and Curt Smith Road was washed out by the big rains a couple years back; the trail meanders in and out of what appears to be a rocky streambed (presently dry for the most part).

Just in from the Southbury terminus @ Kettletown Road there is a blowdown across the trail that's a bit too big for my small handsaw. I did manage to cut the narrow end, but by myself (and coming off a back injury) couldn't get it dragged off trail. Will have to return with tools and/or help.

Most of the storm blowdowns have been cleared. There are a few leaners (including an ominous looking one just in from the above in Southbury).

Trimmed a branch partially obstructing the trail in Oxford. 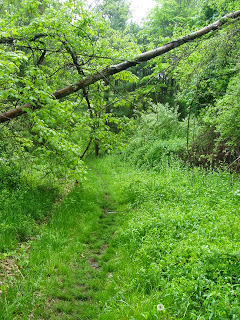