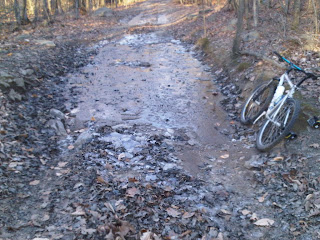 Observations:  The clothing layers keep being added, now it was the Gore beanie and WindBloc fleece; it's getting chillier and taking longer to warm up, but well worth the effort; started down the access road and all the low regions that are usually moist/wet are now getting frozen; jumped on the lower green east where there was a parked truck- probably a hunter's; continued on the green and rodeo'd the Muck Rock Road section; it seems all the low, moist areas have transformed into frost heave fun- it's like riding over;  followed the blue to the red then over towards 145 and onto a grey where the small hidden pond had its first full layer of ice; came out on the green and headed up and took both oranges over to the parking lot where two vehicles stood, with one of them containing two people; circled back up onto the northern green west, then took a grey south back to green by the farm; came across a decked out hunter making his way to the parked truck and we traded greetings; headed home feeling really good. 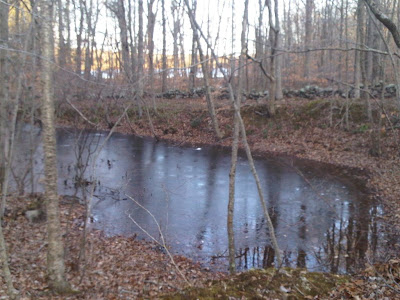 Trail Ambassador Email:  donald(dot)hazuka(at)covidien(dot)com
Town:  Clinton/Killingworth/Westbrook/Deep River
Trail(s) Ridden:  Parts of everything
How did you use the trail:  Mountain biking
What was the time of day:  Mid afternoon
Duration (Hours):  1+
Distance (Miles):  6 3/4
Posted by CT NEMBA at 8:55 AM