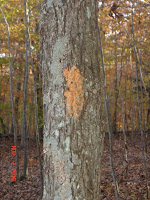 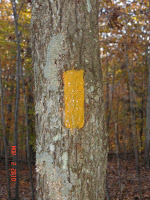 Date of Activity: November 2, 2010
Location: Cockaponset SF / Weber Woods
Condition of Trail(s): Leaf covered and dry
Observations: I wanted to continue the re-blazing of trails so I drove over to the east lot; when I got there I noticed the map box was already empty from the weekend so I filled it again; there were two women there with horses readying for a ride, one woman starting to trail run, and one older hunter entering the lot carrying a shotgun with a dog dangling a cow bell around its neck- not sure what he expected to shoot with that kind of warning; continued on and scraped/re-painted the blazes in both directions of the northern orange section; for some reason my orange paint was much thinner than my can of yellow so I know these blazes will require a second coat; returned to the car as the darkness began to hit, and as I was backing out, noticed the two horse riders coming down the trail; nice, chilly afternoon spent in the woods.
Trail Ambassador Name: Don Hazuka

Trail Ambassador Email: donald(dot)hazuka(at)covidien(dot)com
Town: Westbrook
Trail(s) Ridden: Green/orange
How did you use the trail: Hiking and TM
What was the time of day: Mid afternoon
Duration (Hours): 1 1/2
Distance (Miles): 1+
Posted by CT NEMBA at 7:20 PM

Email ThisBlogThis!Share to TwitterShare to FacebookShare to Pinterest
Labels: 2010 TM Report, We