Date of Activity: November 27, 2010
Location: Cockaponset SF / Weber Woods
Condition of Trail(s): Good shape
Observations: A little chilly at the start, but a beautiful day for a ride with the smell of wood fire smoke in the air; started on the green and took it over by the horse farm and then a grey trail north where I startled a hunter leaning against a tree and gave a wave; jumped on the Quinimay west then a grey down to the white to the green and over to the west parking lot; said hello to an older couple walking their dog coming from the lot where I found just two trucks parked; on the orange to the red and looped around by the horse pond; continued on a grey south near route 145 and was moving along nicely when I heard the dreaded sound of a branch lodged in my derailleur; 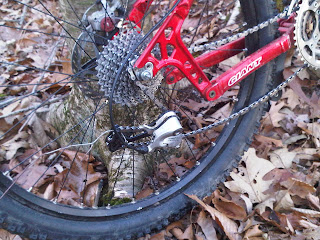 by the time I was able to stop, the hanger was in two and I was dead in the water; I called my pit crew (aka my wife) and asked her to pick me up at the Messerschmidt Pond parking lot; hiked a few hundred yards out to the road and over to the lot where my wife was shaking her head and asking me how much this one was going to cost.
Trail Ambassador Name: Don Hazuka

Trail Ambassador Email: donald(dot)hazuka(at)covidien(dot)com
Town: Clinton/Killingworth/Westbrook/Deep River
Trail(s) Ridden: Bits of most
How did you use the trail: Mountain biking
What was the time of day: Early afternoon
Duration (Hours): 3/4
Distance (Miles): 5