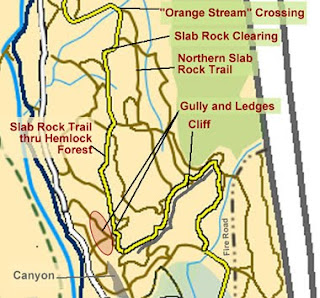 At 9:45 am, I arrived at the Whitney Ave north entrance to the park. Since my plans were to blaze, TM and photograph in the Central Maze area, I hiked in rather than bike. Too much starting and stopping is no fun on a bike!

Out of curiosity, I took the trail that starts right from the parking lot. It goes up about 90 ft and parallels the rail trail until it rejoins it across from the turn off to the north bridge. It's a very nice diversion!
PHOTOS > http://www.vizettes.com/ttc/projects/TM_6-12-2010/whitneyTrail/trail-from-p-lot.htm
Destruction
Crossing the north bridge I turned south and followed the Blue Trail until the Slant Brook crossing, trimming any obtrusive plant overhang along the way. Took a few photos of the fire pits /axed trees by the river.
http://www.vizettes.com/ttc/projects/TM_6-12-2010/firepits.htm
It's very disheartening to see this kind of wanton destruction in the park. Met some bikers later who said it was local teenagers who party in the park almost every night. It seems senseless and can only lead to trouble for everyone who goes there....

From the Slant Rock Brook bridge crossing, I headed up the Slab Rock clearing and snapped a couple more photos of the destruction. A hiker I had met last week had pointed this out to me. I stitched an infographic together to illustrate the ugliness. Life seems to be going downhill when Rampage parties in the woods result in this kind of carnage...
http://www.vizettes.com/ttc/projects/TM_6-12-2010/slabRockClearing.htm

Trekkin' thru the Central Maze
Heading uphill then trekking south, I trimmed overhang all along quite a few other trails in the central maze area. It was overcast and raining intermittently most of the time. I spent some time in the rocky canyon hoping to get a few good photographs there but the darkness, mist and rain messed up that idea!

But I did get a chance to finish the blazing I had planned... The Slab Rock trail thru the Hemlock Forest to the end of to the climb near the fire road (on the northwest side) is now all yellow blazed. This yellow blazing follows a main thoroughfare and loops in thru the ledges area right above the gully real nice.

I moved on to sniff around the other trails in the vicinity (BTW: they take on an entirely different perspective on foot...) trimming overhang wherever needed. There are truly some great trails thru-out this area.

Sunshine at Last...
Lastly, I swung back north thru the Slab Rock trail thru the Hemlock Forest and fortunately the sun came out and the weather turned beautiful. I trimmed a lot of overhang on the Slab Rock trail and snapped a few photos along the way. A lot of sunshine made a big difference.
http://www.vizettes.com/ttc/projects/TM_6-12-2010/centralMazeTrails/hemlockTrail.htm

Once on the main white trail, I headed out, trimming overhang as I went along. The weather at this point was beautiful and sunny and altho' I was tempted to hop on the bike once I got to the car -- it was 4:45 Pm and time to head on home.