Saturday, May 15 , 2010
Condition of Trails: Dry
Trail Ambassador Name: Rich C, Dave Francefort, Rich Stinch
Trail Ambassador Email: mtnbikerdad[at]yahoo[dot]com
Town: Trumbull
Location: Pequonnock Valley State Forest
Trails Ridden: Various
How did you use the trail?: TM, Mountain Biking, Photography
What was the time of day? 9 am - Noon, Plus
Duration (Hours): 3, 1, 1
Observations:
Arrived at DF parking lot and met crew. Although there were only four of us we had the verve and vigor of 14! Alex, a local, joined us and pitched right in.

Our First Project
We built up the rock-armored stream crossing quite nicely as flat rocks were easy to find right nearby. We were joined by another biker: Jose, who graciously chipped in and helped us find rocks and build up the crossing. He was the first to inaugurate it and confirmed it's now a breeze to traverse this stream. 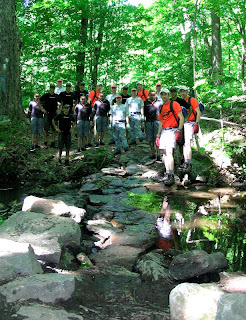 Second Project
We moved up to the mud area at the foot of the rocky climb. This spot is perpetually soft and muddy because the runoff from the long rocky descent above has nowhere to go.

We first knicked the edge of the water-logged trail. Dave masterminded the effort to build a rock-lined channel where the water usually gathers. We dug out a channel and lined it with rocks pitching the channel slightly to direct the water off the trail. We finished it off by tapering the edges, making it almost almost invisible to the unobservant passerby. 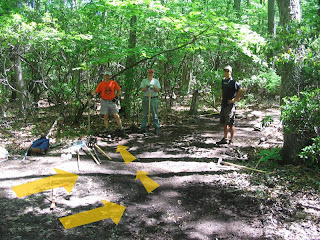 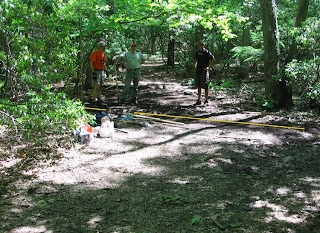 As we were working, we met a couple of hikers and quite a few bikers who commented how much fun and improved it was riding the rock armored stream crossing we just built.

On our way out, we also met an enthusiastic history buff with a metal detector searching for ancient artifacts. The Pequonnock Valley park has quite a few historical ruins such as the foundations of the Tait Paper Mill nearby where we worked and remnants of an old earthen dam and spillways from an old reservoir a little further north.

On a side note: Our trail work at Mianus Park has sometimes been unkindly received. At that park, people thought the trail changes we made were unsanctioned rogue work done surreptitiously in the middle of the night! To alleviate this potential misunderstanding at Trumbull, our trail work is "signed" - one way to spread the word! 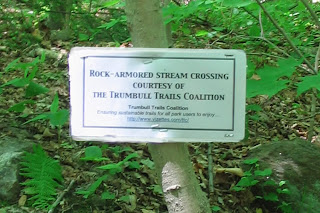 Post TM
Dave and Alex had to split so Rich S and I rode a bit. Rich has been quietly fixing up a lot of the trails in the North Bridge area and has been keenly observant of the flow of water after our recent heavy storms. Up by the North Bridge (a.k.a. Coyote Crossing), he pointed out mammoth run off issues that need to be redirected off the trails a little higher up. The TTC will be tacking this sometime soon as well.

We also observed the larger-built boardwalk needs to be extended because the smaller size doesn't hold up and is broken. 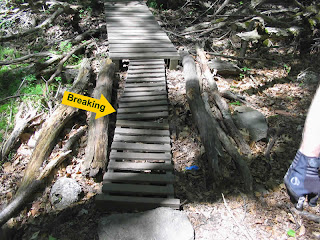 My bike had a scrunched cable and wasn't shifting at all but after returning the tools and getting the cable replaced, I came back to the park that evening and rode for about an hour, starting from Whitney Road. The weather was phenomenal: sunny, just perfect for an early evening ride!
Posted by CT NEMBA at 8:45 PM