Ambassador Email: Thom(at)ectrr(dot)com
Town: Lyme , CT
Location: Hartman Park
Trail(s) Red
How did you use the trail: Maintenance
What was the time of day: 8AM- 11:30AM
Duration (Hours):3 1/2 hours
Condition of Trail(s): Perfect conditions...!! tad muddy :)

Report: Well, I send out the news on kinda a short notice, but we got bodies.!! There was seven of us who showed up which was actually just the perfect amount of People! AlanTinti was the first to show up with shovels and such and a tad early like myself. We hauled the main structure out there and he stayed behind with shovels while I went back with scraps from the old bridge and waited for the others to show up. Soon after Linda Bireley and Marty Cone from the Town of Lyme showed, opened the gate and we unloaded the rest of the stuff down at the field.
Glenn Vernes and Paula Burton showed right after and we started to haul it all in. By the time we had gotten there Alan had the whole area cleared up, water flowing smoothly, old bridge gone, and some nice footings set for the bridge. We went right at it, assembled the frame structure and plopped it into place where it settled with little or no need for adjustments (Thanks Alan!! Nice job on those footings!!) Right around then Kiernan Wholean also a Lyme resident showed (he took the orange trail instead of the red..opps) And then we went about screwing the decking down.. 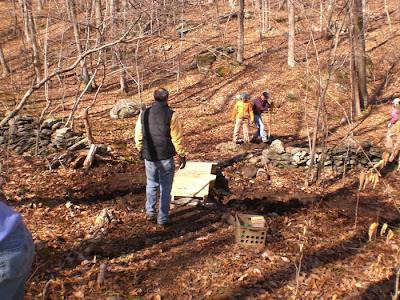 Really only needed a few people on the decking so Paula and a few others went about redoing the stone armoring of the trail just after the bridge to make it less of a "hop rocks" to a nice stone single track bed through the some what muddy over flow section. Didn't take long and we wer all done posing for the camera to take the group shots... 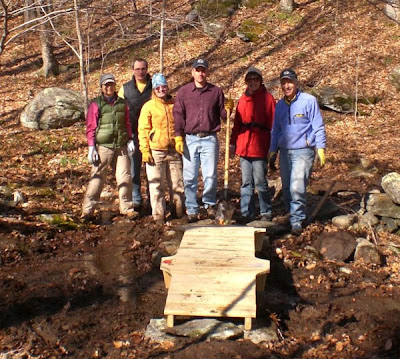 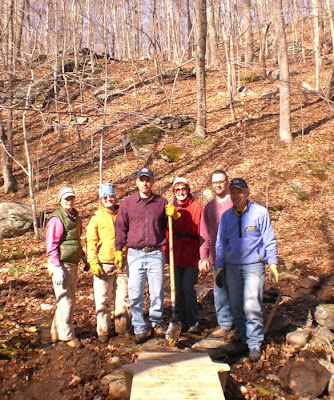 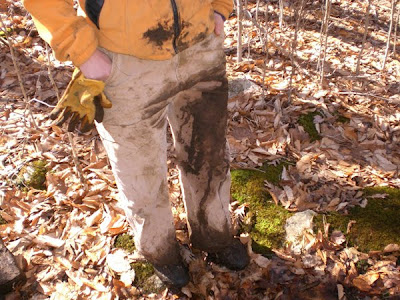 Paula likes playing in mud!
But, we weren't done yet!! On the way back we were crossing a rather moist dpi on the trail. Everyone seems to have energy while I was discussion with Linda (Town Coordinator for all this) about how we could go about draining the area... well everyone just picked up shovels and started digging!! After a bit of shovels to rock we came to the conclusion that there is MANY layers of rocks armoring the old road. So we decided to turn it into a single track by basically removing to top layer of stone on the lower side and build up the higher side and channeling the water flow down where we removed the top layer... Worked great!! The area will still be moist, but now you'll have a nice high, solid surface to ride/hike on instead of a mix of rocks and mud. 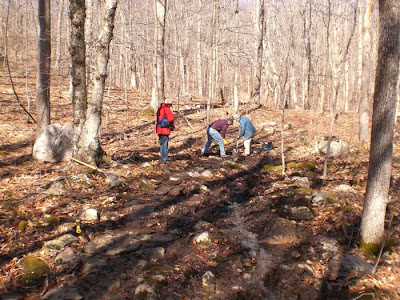 Thanks to all you NEMBA Members who showed up on such a short notice. (they have 4 more they want done now ;-))
Thanks to the Town of Lyme for the materials and those residents who came to help!! 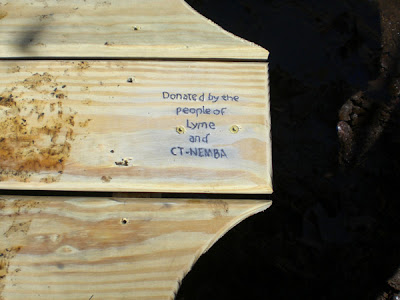