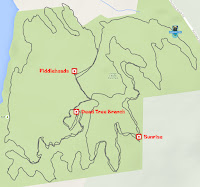 Observations/Information: After a rainy week, I couldn't wait for a ride, so I took probably my longest singletrack ride since the crash in August (not saying much, I know, but to me it is).  I rode the new trail down to where it dumps out onto the fire road, then down to Hunters, up to Daffy (eastbound), out to Where's Waldo, all the way to the western terminus of Daffy, back to Hunters, down to the fire road, up to Thing3, down to the lake, then up the western end of Where's Waldo, to Daffy, to Hunters, up to Where's Waldo, eastbound back to the parking lot.  (A lot to type, but the map makes sense of it.)

Despite a week of wet weather, everything was pretty dry, except that spongy spot on Daffy near the Hunters intersection (and even that was drier than expected).  That said, it looks like someone was riding just after the rains before the trails had a chance to dry out.

Items of note: Paula (I'm assuming) has a couple of signs up near one of the trail features on T3 requesting people not open unauthorized lines.  There's also a nice little bridge on T3 where that mucky brook crossing used to be (and pin flags indicating a proposed reroute).

There's a rotten tree leaner across Daffy a bit to the west of the Hunters intersection.  Ride-underable, but I won't be surprised to see it come down in the next windstorm.

TM = removing branches here and there.  I was getting slapped in the face enough next trip in I should probably do some lopping.

No other two-legged users in evidence; just me and the squirrels. 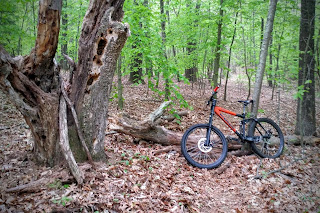 Someone ramped it somewhat with pieces of the rotten tree.