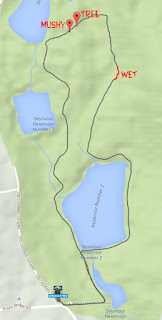 Observations/Information: This morning's sunrise 20-degree quickie was in the West Block. In at the Rt. 42 lot, down the hill then left up to Res 2, around and up the east side of #3 to #4, down the Camaro(less) Trail, right onto the bypass down to the power lines, then Red down to #2, around the east side and back up and out.

It doesn't look like the snowmobiles have been in, but other users plus thaw/refreeze has "groomed" a lot of the reservoir loop at least. Not so much some of the other trails - climbs were tough and got bogged down enough to walk it more than once.

The predicted cold snap this weekend may change this (though probably not for long), but the mushy patch on the Camaro(less) trail is all that and then some. And the wet stretch around the power line crossing is an absolute mess.

Item of note: just east of the mush on Camaro(less) a tree is down, not huge but too big for hand tools. Given the snow on the trail past it and the snow on top of the log, I had a hard time seeing it until I was almost upon it, and I was moving slowly. I can easily imagine a faster user (e.g. snowmobile) hitting it, especially in lower visibility. I cleared as much of the snow on the log as I could, and in the next day or two want to get back over there to apply some flagging tape to mark it better until it can be removed.

TM = clearing a couple branches here and there.