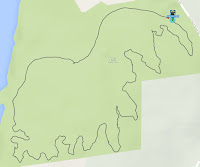 Observations/Information: This morning was the first "for real" singletrack ride since The Crash. (And yes, I made it a point to err on the side of caution and walk anything I wasn't absolutely sure I could handle without dumping it.) Rode Where's Waldo (red) beginning to end, and the fire road back. Bike = Kona Wo.

TM consisted of kicking the odd branch off trail, and then at the bottom of Waldo just in from the fire road, there was an old, dead cedar with its pointy branches perilously close to the trail, such that someone coming down the hill and losing it could have been impaled. I cut the top off, pulled the rest further off trail, and knocked off some of the nastier pointys.

Word of caution: there's a big pile of horse poop right in the middle of the trail shortly after the eastern (i.e. the first, if riding from the parking lot) intersection with Daffy.

There's still a broken board on the little bridge at the bottom of Hunter's. Really, all of them should probably be replaced. I might ask Paula's permission to do so.

Nobody but me and the squirrels in evidence, though there was another truck in the parking lot.

Update: poop kicked off trail, and I'll go to work on the bridge at the bottom of Hunter's in a day or two.