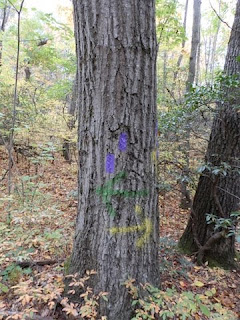 Observations/Information: Blazing trails is like eating potato chips: you can't stop at just one. I received permission from the state forester to reblaze the White Trail from near the flag overlook crossing over High Rock/Toby's Mountain to clarify an important and confusing trail. With that finished, I set my sights on other trails. Thirty hours of work later over multiple days, I have blazed 8 miles of trails with another 3 miles to blaze. 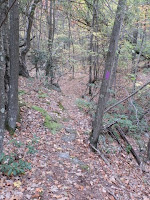 Using the forest map from the state website, this is what is completed so far. The Purple Trail has been blazed from the steep rocky road coming up from the big rock parking lot off Cold Spring Road and follows the outer, easternmost trail in the forest for 3.2 miles, extending to the property boundary. This trail was challenging to blaze because it passes through some open areas with too few trees to blaze. I created rock piles at two key turns near the top of the hill where there are woods roads going in multiple directions. When I went back a few days later, someone turned over one of the rocks with a blaze (why, I don't know). Someone had blazed parts of this trail in Yellow, using a flaky paint that will not last long, and did not get permission to do this. The yellow blazes are scattered in their location. I recognize that yellow is more visible than purple, and I need to apply a lighter shade of purple as a second coat in the spring. I found an existing, overgrown trail that was fortunately blazed in Red because that was the color I was using to connect the Purple Trail to the existing woods roads on the west side of Reservoirs 1 and 2, and the east side of Reservoirs 3 and 4. The existing woods road south of Reservoir 1 is heavily overgrown, in part because it crosses private properties, one of which has a "No Trespassing" sign posted. This Red Trail has been blazed so far for 1.4 miles, from the Purple Trail until midway up the east side of Reservoir 4. If weather conditions are favorable, I will hopefully blaze this trail this fall up to the junction with the woods road north of the reservoir. 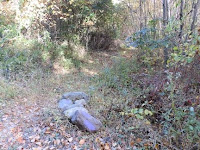 Using the main through set of woods roads as the Red Trail creates a "spine" from which I blazed the existing woods roads as loop trails. The 1.1 mile trail on the east side of Reservoirs 1 and 2 are blazed Red-White. I am also using Red-White on the trail that roughly parallels the Oxford-Beacon Falls town line on the map. The 1.2 mile trail connecting the west side of Reservoir 2 and crossing the dam of Reservoir 3 and intersecting the Red Trail on the west side of Reservoir 4 is blazed Red-Green. The last stretch of this is known as the Camaro trail, due to the abandoned car on the trail. I put a blaze on the car as a whimsical touch to the trail. Finally, the 0.3 mile short connecting trail from the left shoulder of Reservoir 2 to the Red-Green Trail at the base of Reservoir 3 is Red-Yellow. I used Purple-White to mark the 0.3 mile trail connecting the Purple Trail to the Red-White Trail. Someone had blazed one of the woods roads (again without permission), extending north from the Purple Trail. On the map, this is the third of three woods roads in the center of the forest. It is marked with a north facing arrow and the mileage 0.6. I did not have time to follow it to see how far Green was blazed. Other trails to blaze include the gorge trail in Blue, which is not suitable for mountain biking, the steep trail from the big rock parking lot, and the woods road that runs from near the big rock parking lot to the Red Trail. If all this seems too confusing, the state forester plans to add these colors to the map and update the map for the website. 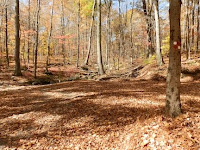 Image Description(s)/Instructions: Three pictures show various locations along the Purple Trail, including bootleg blazing of Yellow and Green. One picture shows the junction of the Red-White Trail with the Red Trail by the top of Reservoir 2.
Posted by Unknown at 10:53 AM