I did some emergency TM at River Highlands this morning. One of the bridges on the yellow trail had been moved after the footings were washed away by the rushing stream, and the trail had to be connected to the bridge at the new location. After getting OK from the LM I went in and did it. The job required benching but the rick-free soil is easy to work and I was able to accomplish the job in about an hour. I packed the bench and spread leaves on the edges. The trail almost looks like it was there all along.

The new line is harder than the old because the bridge is now oriented at a right angle to the stream, and one must negotiate a 90 degree turn after riding over the bridge when going downstream, and just before when riding upstream. I was sure to carve out enough room to make the turn and, although it might be unnerving to some, it think it will require more nerve than skill.

This was an emergency situation because the trail was unsafe as it was, so I had to go out and do it myself. I'll be scheduling a TM day soon where we can address some other areas where the existing trails need work. 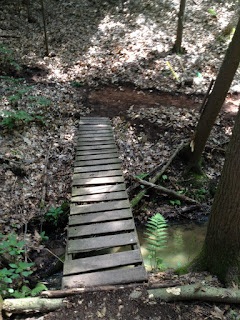 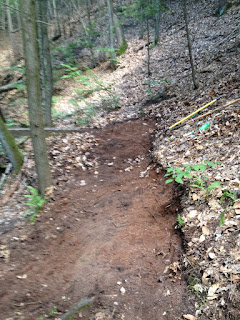 Good job keeping up the trail