Observations/Information: I had too much wine last night 8^) thus I figured what the doctor ordered would be a longish (for me) ride... so Tour de Larkin it was.

Rode up to the Riggs Street crossing, right on the trail and out to Route 63, turn around and head all the way in the other direction to Kettletown Road, then back to Riggs Street and home.

The first wet patch encountered was just east of Towantic Pond (where it tends to pond on the trail every spring). That wasn't bad compared to the mucky mess on the Towantic Hill Road to Longmeadow segment. The western part was mud; just after, a healthy stream was running down the middle of the trail (eventually exiting to the right). 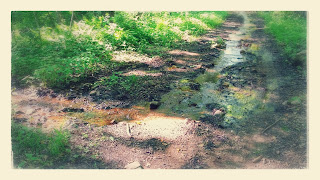 At about the midpoint between South St and Wooster Rd is a hungup blowdown, with the leafy tree canopy in the trail. It's ride-underable (albeit with a helmet thwap) but I can't imagine it'll make the equestrians happy.

Next mucky patch is the usual out by the condos just in from Route 63.

Heading back the other way, just in from the Riggs Street gate is an odd little sinkhole or something, probably eight inches or better deep. Someone marked it with some sticks. Likewise, just before the power lines there's an odd hole in the trail (likewise marked with a stick).

A little damp just before the Route 67 crossing, and the rough patch between 67 and Curt Smith Rd is still rough (and shockingly mostly dry), but rideable.

A few trees down between Jeremy Swamp Rd and Kettletown: one was easily ride-overable (no hop needed), one I could move off-trail myself, and a third is too big for my handsaw. 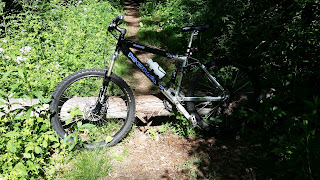 TM = aforementioned tree and some branches.

Plenty of other users this morning: walkers, dog-walkers, joggers, even some bikes. I guess someone organized a Rt 188 to 63 ride, as evidenced by a baggie of maps left at the 188 parking lot. (Don't know if I'd agree about the muck by Towantic being rideable, though.)  No horsies, but plenty of evidence they had been there. 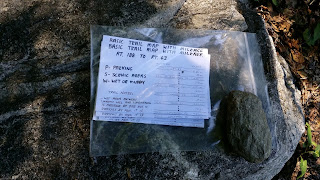 Trail Ambassador Name: John Joy
Trail Ambassador E-mail: jmj [at] savagejoy [dot] com
How did you use the trail? MT Biking
Trails Ridden:
Time of day: Morning
Time/Duration (hours): 4 (including travel to and from, and TM)
Approximate Distance (Miles): 20.6 (10.3 each way) + 6.2 to get there and back
Image Description(s)/Instructions:
Posted by Unknown at 2:45 PM