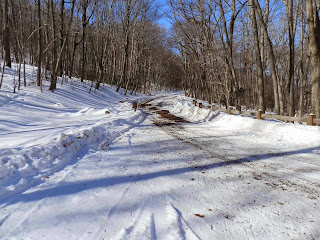 Observations/Information: I met with a representative from a private school that is interested in having students help with trail work. They plan to start once the weather warms. I told them to focus on cutting invasive plants and picking up litter. While I was there, I walked a circuit, out on the Red Trail and back on the Teal Trail. I cut lots of vines and pricker bushes on the Teal Trail. I pruned mountain laurel on both trails. I cut a blowdown on the Red Trail that would normally be at knee height, but it was buried under snow. The Red Trail was packed down by boots, as was the Teal Trail near Westville, but some of the time I was post-holing through the snow, as snowshoes are definitely not compatible with the trailwork I was doing. Baldwin Drive is plowed for access to the antennas, so that is one option for biking. Red is one of the designated biking trails at West Rock. I have suggested to the state that they open up the Teal to mountain biking, as that trail is an old carriage road. There is still a 24-inch diameter red oak across the Red Trail by the Teal Trail. I asked the state if they can cut this, which they will do at some point. The tree has been down since 2012, and a well-used trail has been created around the root ball. 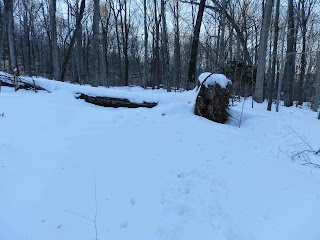