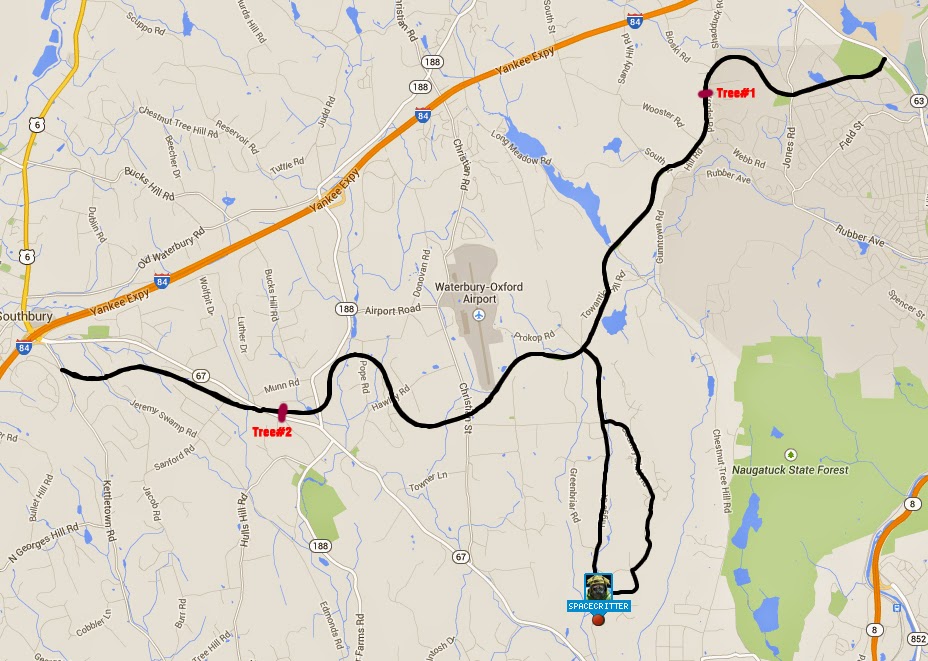 Observations/Information: Since I haven't in a long time, I decided to do the end-to-end ride on the Larkin. My usual deal: ride up to the Riggs Street crossing, right on the trail, take it to 63, turn around and head all the way the other direction (Kettletown Road in Southbury), then back to Riggs and home.

I decided I didn't want the added absurdity of taking the orange beast (not that I haven't in the past), so I wrestled the Dawg out of the garage for the occasion. (To see the state of the garage is to understand.) Stopped for a quick photo of Towantic Pond (and to fix one of the straps on the Maxpedition pack). 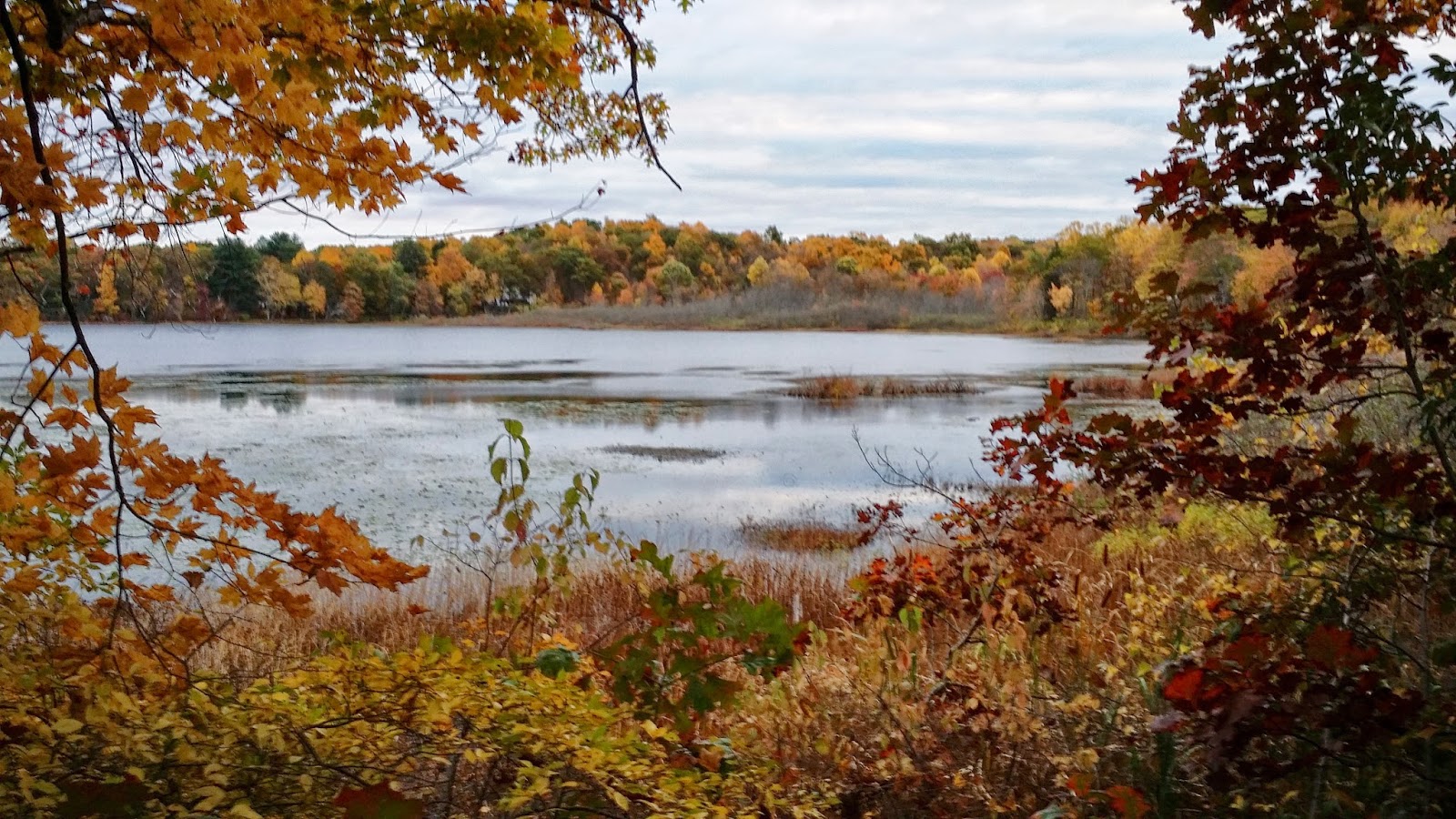 I rode without seeing much to do, TM-wise, at first. Shortly after saying to myself, "Hey, I might make it through the entire ride without doing any TM!" I came across the first branch needing clearing. There were several instances of branches down on the side protruding into the trail, and two instances of small trees down or coming down (one was bent over such as not to cause much grief for us, but would be a PITA for the equestrians, so I got rid of it). 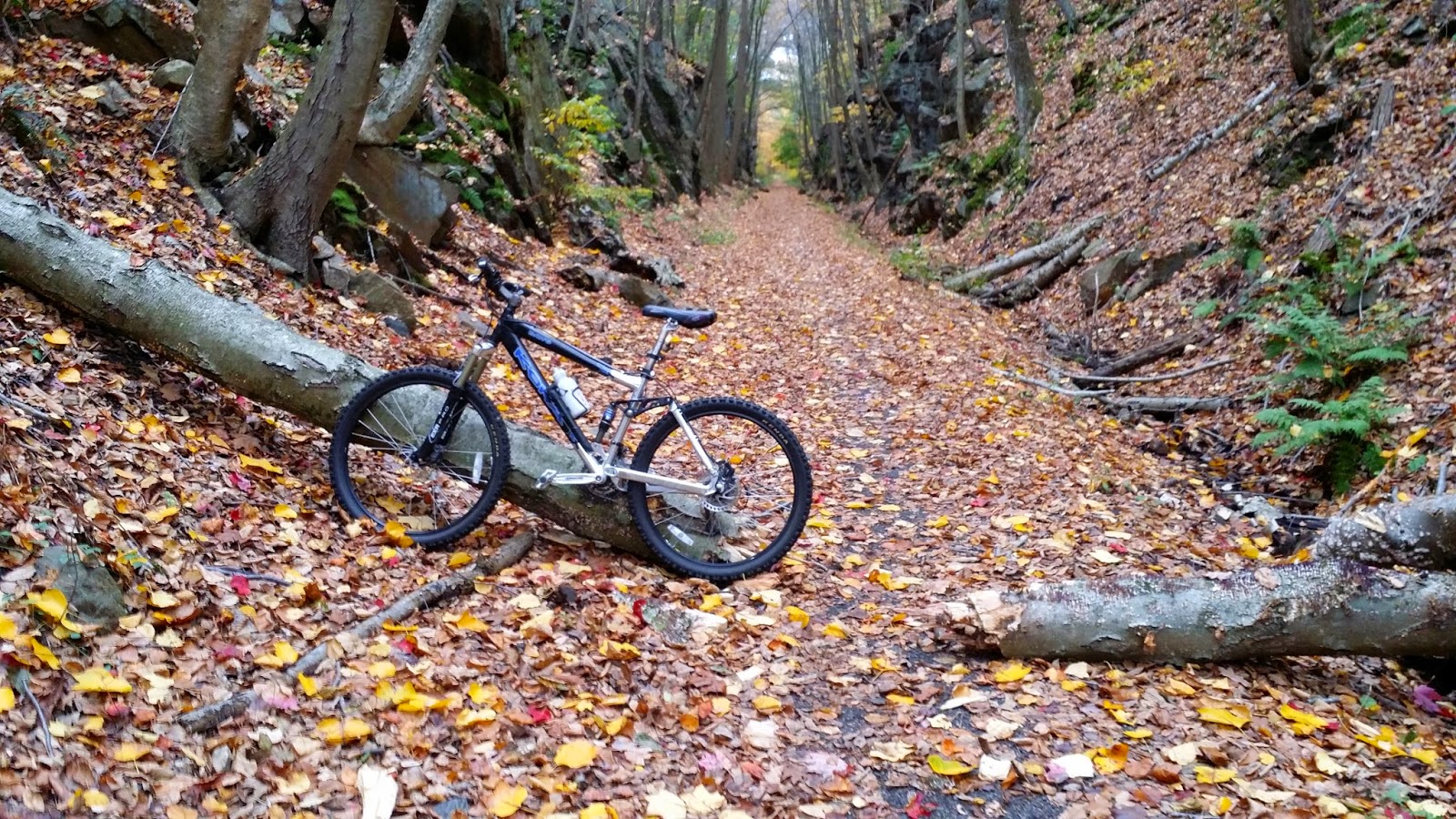 There were also two trees down too big for me to deal with - the first out east (and fell and broke, so can be ridden around without need for hopping), and the second between Rt 188 and 67 in Southford. The latter had brought down a smaller one with it, and its branches would tangle anyone trying to go over it, so I lopped those so it was at least hoppable. (And yes, I did.) Still needs to go eventually. 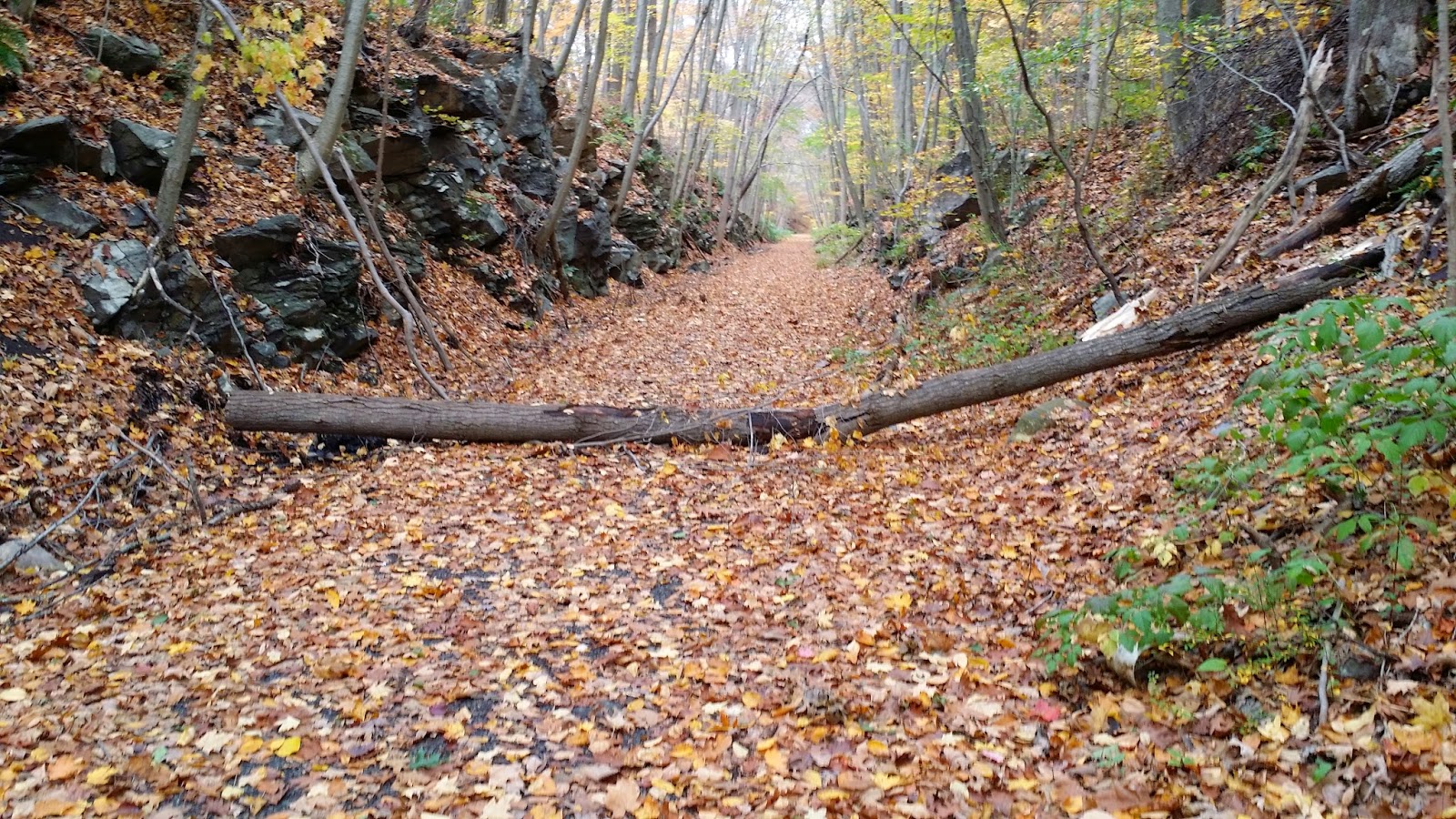 Additional TM in the form of tossing the occasional (several dozen, actually) nuisance branch off trail.

There were fewer leaves down than I expected, except for a small stretch on the segment between Curt Smith Road and Jeremy Swamp.  Mostly dry (except for the usual spots that are always wet), and the recent rain tamed the sandy patch out by Towantic Pond.

Saw yet another little tee-pee between the trail and the condos in Southbury. Not sure what it is with these tee-pees. 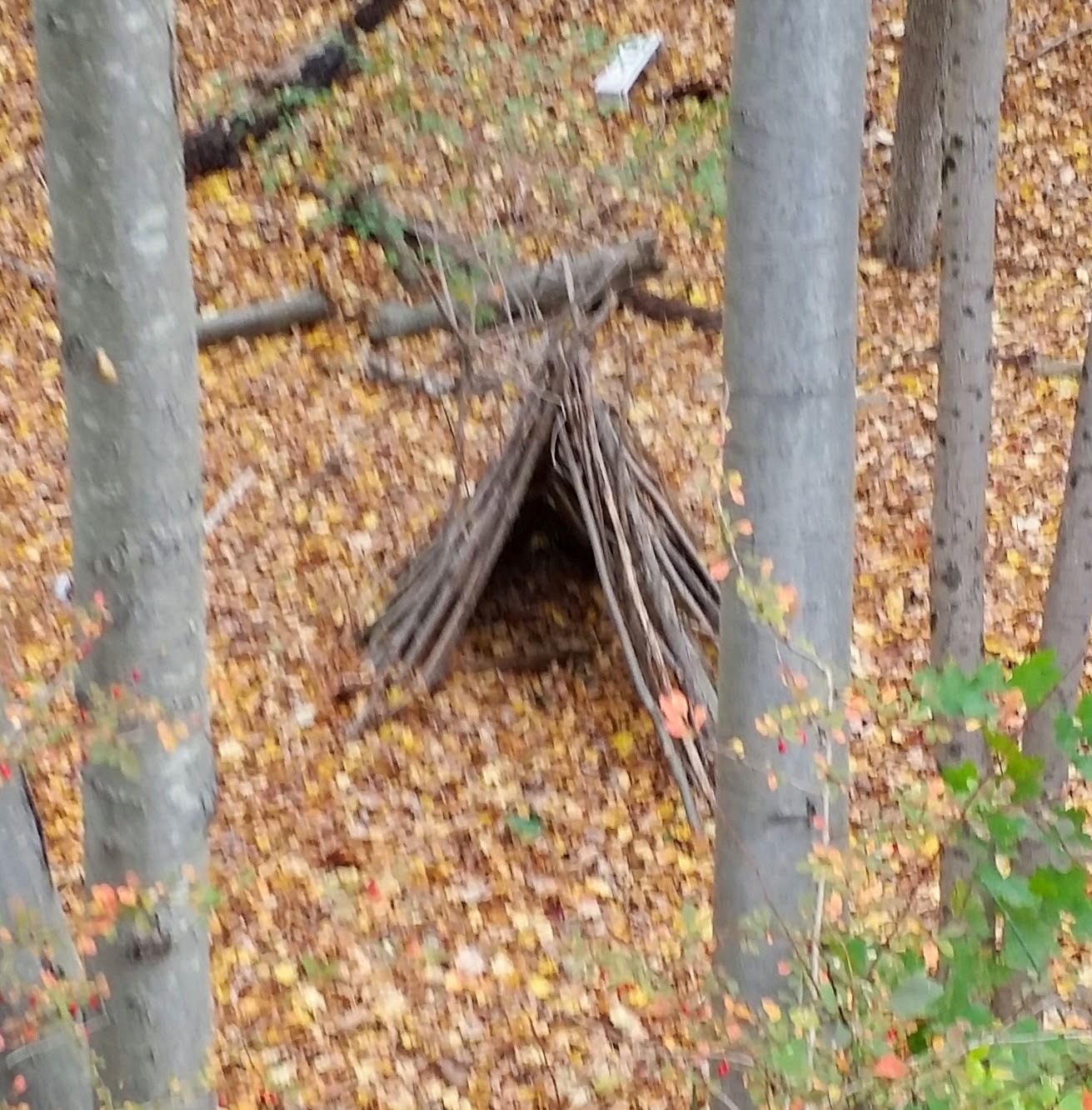 Scads of trail users today: a ton of dog-walkers and joggers, and (I'm happy to report) several bikes. No horses (but the usual evidence they had been there).

Returned home to have my favorite post-ride breakfast. 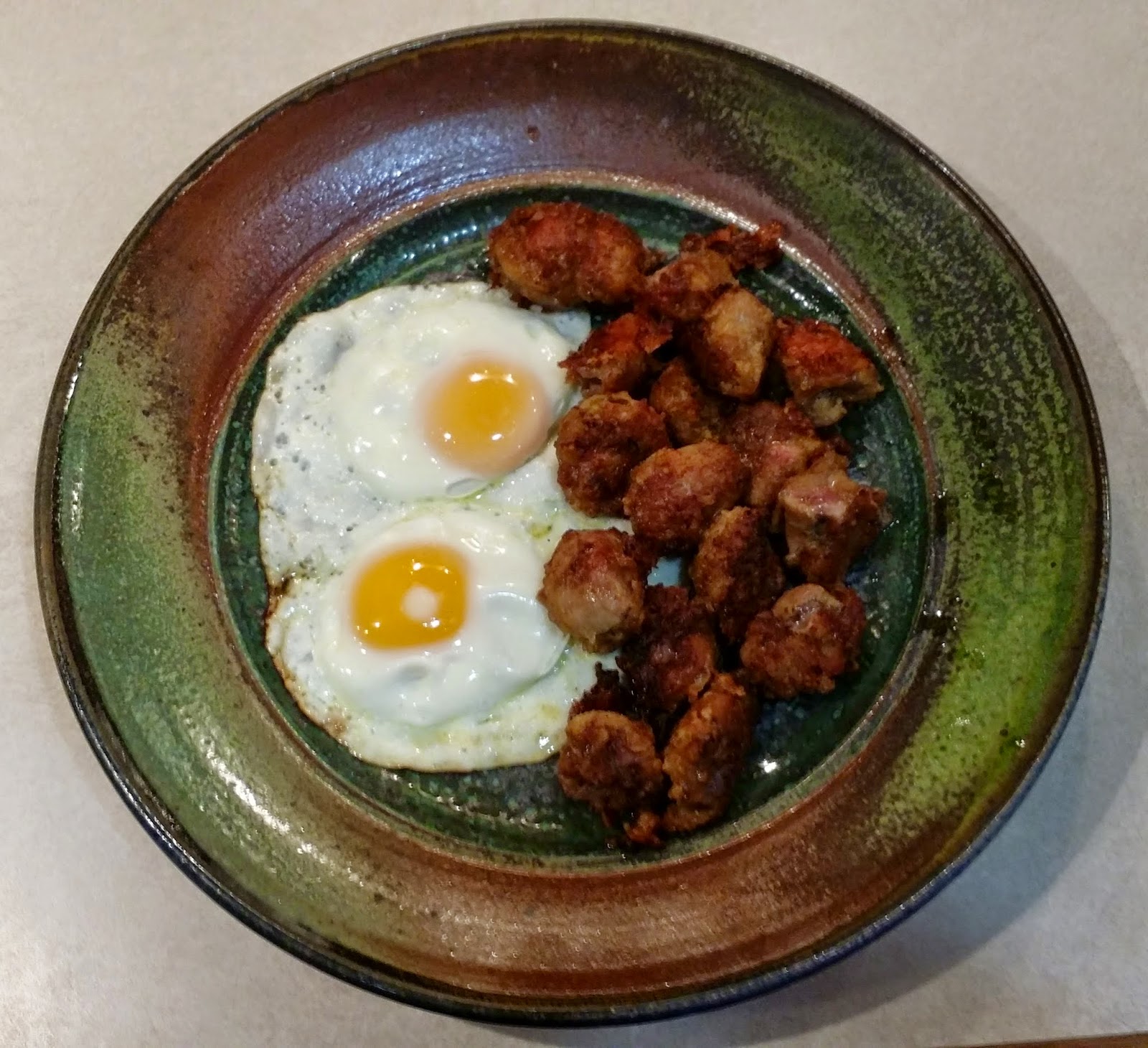 Trail Ambassador Name: John Joy
Trail Ambassador E-mail: jmj [at] savagejoy [dot] com
How did you use the trail? MT Biking
Trails Ridden:
Time of day: Morning
Time/Duration (hours): 4 (including travel to and from, and TM and photos)
Approximate Distance (Miles): 20.6 (10.3 each way) + 6.2 to get there and back