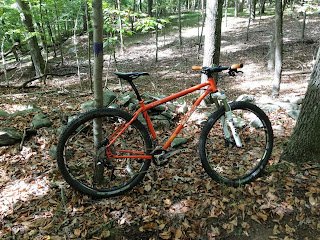 I don't know if the trails were cleaned up for the event, but they were in buff shape. Only one tree down, which I cleared, and no stick litter to speak of. The soil was dry and the trails appeared to be well-ridden. There were a lot of riders testing bikes, and a few who came to do their own thing as well.

Hurd has some of the best gnome-built trails I've ever seen. They avoid the fall line in most places, and have held up well for that reason. They're fast and flowy and relatively smooth and, except for a few too-sharp braking turns, allow you to carry your speed without excessive braking.
Trail Ambassador Name: Glenn Vernes