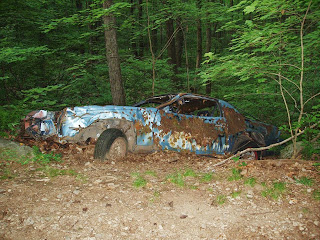 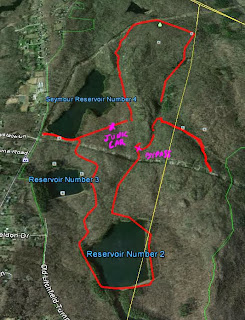 This time, took a loop from Res 4 up to the fire road, down to and around the lower reservoirs and back. (This ride included that segment with the junker – and I stand corrected, it's a junk car, not truck. I seem to recall a junk truck northwest of Res 3, but I believe it's been removed.)

Each of the routes from the reservoir trails up to the fire road has their idiosyncrasies, namely some stretch that's sufficiently rocky and steep to be unrideable, by me at least, and with some mucky bits thrown in to make it interesting. The way up I took the trail east of Res 4: it gets nasty north of the reservoir, not quite up to the intersection with the power lines.

Back down I took the trail that runs between the curve in the fire road and the northern tip of Res 2. The upper end is mucky (though not as bad as it has been), and the badly washed-out and rocky section just above the trail junction with the blowdown (and none-too-sustainable bypass) is dry, unlike my last pass through a few months back when it was an active watercourse.

(Also took a side excursion on the trail that runs east to the gravel roads south of the fire road, and the east-west power lines that run to the Beacon Falls substation. Still looking for that elusive trail shown on the DEEP map that runs to the east side of Res 2.)

Trip back up to Res 4 was via the trail east of Res 3. Still a big half cut up blowdown just above the Res 2 loop which has been there at least since Irene, I think.

TM consisted of trimming a couple of branches, including several poking up at nasty angles threatening to impale the unwary. Saw one dog-walker heading down toward Res 1 while I circled Res 2. Pardon GPS dropouts in the image (no, I cannot ride across water) – and locations are, of course, approximate.