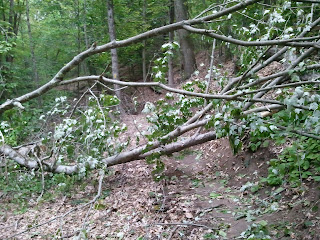 Date: June 1, 2012
Report Type: TA Report:
Trail Name: River Highlands State Park
Town: Cromwell
Trail Conditions: Great
Observations/Information: I'm really impressed with the trail work that happened a few weeks back. I feel like a jerk being out of town that weekend, because it would have great participating. Sadly, a huge tree fell across the reroute in the muddy area. I like the attempt at Sidewinder (the trail at Kingdom Trails) in the gully in the far side. Although, it's kinda hard to get enough speed to ride it like Sidewinder. Maybe after the dirt gets packed in...

Also, one of the stupid trail braids had opened up again after I had put branches in it three or so weeks back. I put bigger branches in it and then by the time I had doubled back on the green trail, they were gone! Then I realized that the guy who was doing it was there. I had ridden passed the exit to the braid, I turned around at the end/beginning of the green trail to try and catch him and ask him why he was braiding the trail. Seriously, the thing that the braid avoids is not even some complicated stunt. It's three logs! Anyway, I couldn't find him and I put the branches back. I cannot imagine that the DEEP would want two trails on the side on an escarpment that could cause erosion.
Trail Ambassador Name: Brendan Mahoney