Date of Activity: Saturday, June 18th, 2011
Condition of Trails: Damp but Rideable (rocks and roots still slippery)
Location: Pequonnock Valley State Forest
Another beautiful day best spent outside! I've disbanded the TTC Monthlies because too much else was going on in Trail Work, etc. this month so today I hiked in solo.
Back in January when the TTC met with The Trumbull Parks Commission, they asked us to improve the blazing. Today's TM was focused on adding adequate blazing on the both the Blue and the White Trail north of the Serengeti. 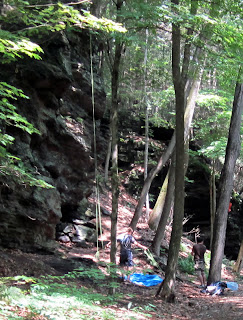 Rapelers
I hiked in from the North End and said hi to a couple of rapelers off the rail trail. Once across the bridge. I had to hobble around a blowdown where you make the turn south onto the Blue. Once past, I proceeded to blaze and trim a few spots here and there . It was muggy and the rock and roots were very slippery but the trails were surprisingly not that muddy considering the deluge we had this week. 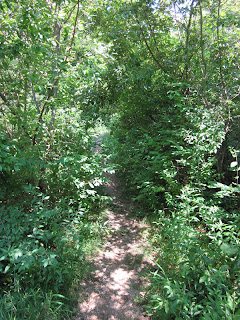 serengeti-jungle
I continued on the all along the river and once at the Serengeti, I forged into the jungle where the Blue cuts a muddy path across a marshy tall grassland. I trimmed a lot but its kind of a hopeless here as the plant growth is so spectacular along this section, it may close in again in a couple of weeks. 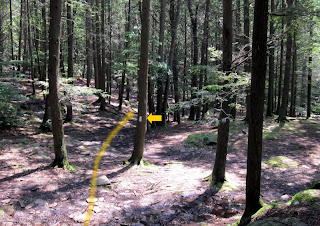 TurtleRock
Circling back on the Sandy Rim trail (past the Gap Jump), I picked up blazing the white when I got near the Pine Forest area above Turtle Rock. This area of barren pine forest floor is a hodgepodge of trails every which way but I merely beefed up the white blazes someone had thoughtfully put here last year. The White is now blazed and trimmed all the way up past the playground.
Feeling mighty grubby at this point, I sauntered back to the car, downed a burger and beer at a nearby deii and returned to ride 1/2 hour later.
I made it a quickie ride, south on the White and then up to the Central Maze to ride the Slick Rock Trail (it was still a bit slippery). 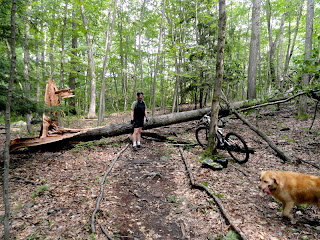 blowdown.jpg
There were a couple of HUGE blowdowns near the flowy trail that descends northward to the Orange Stream. I ran into my friend Steve McAllister at the stream and he agreed to snap a few shots of the blowdowns. TTC -affiliated locals were notified to take care of these - and if they prove too formidable, I'll ask the Town to finish it up. It's amazing the power of heavy rain and winds - the trunks on these fallen trees were massive.