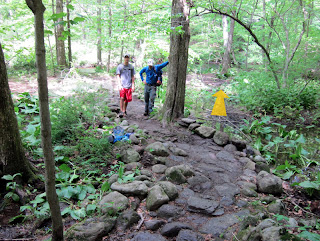 TM - armoring
A short section of the Blue traverses a swampy section and needed some serious adjustment to the jumbling of armoring at the foot of the hill. The yellow arrow on the photo indicates where the trail had veered off the armoring. This section was now under quite a few inches of water and has been quagmire for some time. We beefed up all the armoring section, digging in some really big thick flat rocks and made the line visually very clear to riders. It's still techy but it's built till last until the cows come home...
In addition, we closed the now underwater braid by the river and opened up (and armored where needed) a granny path that was already made to avoid the short rooty section by the river. Alex, despite a stitched up injured finger, was a great help and the three of us finished the work by 11:30 AM.

Ride and Slide
I took a break for lunch and rode the White, Blue and Yellow later for a couple of hours. It was muggy and steamy and most of the lower trails were waterlogged.
I checked out the gravel bed the Town is putting in in the Serengeti and it's strangely wide enough to drive a Mack Truck on. Hopefully they will continue it further south - over the mudhole mess but narrow it to at least only the rail trail width. What a waste of stone being so wide but perhaps it was built wide to allow vehicles passage in the event of and emergency. (?)
The good news is, up on the White Trail near the fence ride along a lengthy stretch that's frequently muddy, the Town has added a huge knick at the lowest point, allowing water to finally drain off.

The rain started coming down and it made the trip out miserable (slippery roots and roots galore).

Trail Ambassador Email: mtnbikerdad[at]yahoo[dot]com
Town: Trumbull
How did you use the trail?: Trail Maintainence
What was the time of day? 9:15 - 11:30 AM
Duration (Hours): 2.25 Hours Plus
Posted by CT NEMBA at 4:25 PM