Date: April 10, 2011
Report Type: TA Report
Trail Name: Cockaponset- Weber Woods
Town: Clinton/Westbrook/Deep River
Trail Conditions: Generally dry with low lying soft patches
Observations/Information: It was my first mountain bike ride of the season so I decided to do the perimeter of the forrest in a clockwise direction; took the green to the Quinimay where there was evidence of a lot of horse activity and deep tracks due to the softness of the ground; someone did some rogue pink blazing on this trail and it looks brutal- 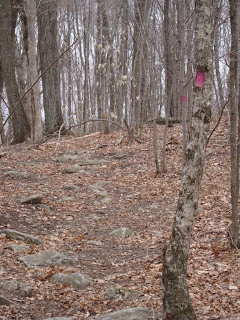 not sure why because the trail is easy to follow and already has diamond shaped aluminum markers nailed to trees; continued down to the east lot where two cars and a truck were parked; checked the trail map box and found mice have taken it over with nesting; 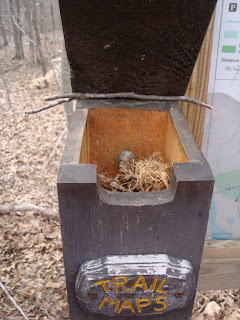 the trails were in really good shape with the exception of all the deep horse tracks which are a real hassle both up and down hills; looped around the southern green west and up the long, slow incline when I came across a muddy region where some ATV rider just had to play; 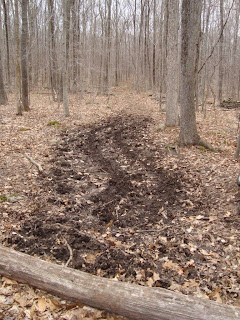 for the most part the trails were real nice and clean and proved to be a great maiden ride.
Trail Ambassador Name: Don Hazuka