Date of Activity: Jan. 16, 2011
Location: West Rock Ridge State Park
Condition of Trails(s): Snow covered
Observations: People were out in abundance enjoying the snow with cross-country skis, snowshoes, and just plain boots, some with dogs. The trails around Lake Wintergreen were reasonably beaten down to the point where snowshoes were not really necessary. In other places they were definitely necessary. Baldwin Drive (the road north of the main entrance) was plowed, due to the antenna farm near the West Rock Tunnel. The road up to Judges Cave and the South Overlook was not plowed. If you want to build some quad muscles for hill climbing, try snowshoeing. Snowshoeing for 4 miles in deep snow is exhausting, even if the trail is somewhat trampled. With the expected ran on Jan. 18, the trails are likely to be an icy mess for the foreseeable future.
Trail Ambassador Name: Tom Ebersold 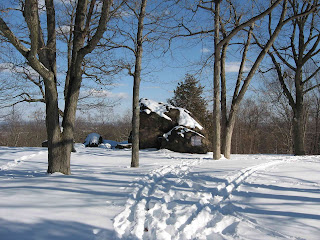 Trail Ambassador Email: bikehikekayak {at} sbcglobal {dot} net
Trail(s) Walked: Red and White around Lake Wintergreen, Baldwin Drive, the road up to Judges Cave
How did you use the trail: Snowshoe
What was the time of day: noon to 3 p.m.
Duration (Hours): 3
Distance (Miles): 4