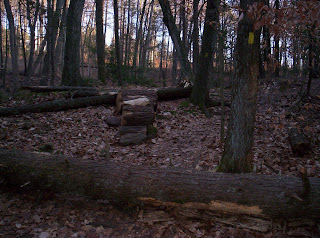 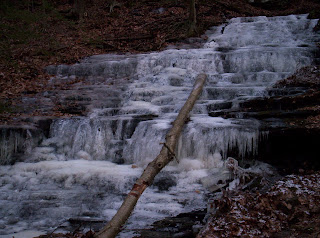 Observations: A quick after work ride revealed that the trails are frozen hard with a lot of crunchy, crystallized ice on top. This is hard stuff to ride on, because it creates a lot of resistance, and can also hide obstacles. It can also hide holes large enough to stop your front wheel and send you over the bars. There were still a few very large trees still down from the last storm, but not many sticks or twigs to speak of. The Little Falls is now frozen, and made me think of the movie Ice Castles, which I haven't seen.

The highlight of the ride was a wildlife interaction. I was riding down the red trail, just below the four corners, when a large brown and white bird swooped over me and landed in a tree not far off the trail. It was a large owl in winter plumage, and sat casually in the tree as I removed my camera and took some pictures. The pictures didn't come out, but it was a barred owl like the one in the photo, only larger. 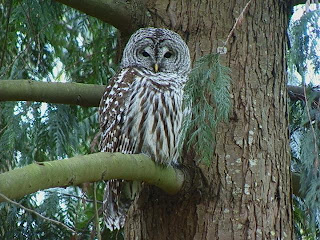 The trails could have been better, but still a worthwhile ride for the wildlife and winter scenery. If you're looking for a place around Middletown to ride this weekend, I'd suggest River Highlands- the conditions are better there.

Trail Ambassador Email: glennvernes33athotmail.com
Town: Middletown
How Did You Use The Trail?: Mountain bike
Time of Day: Afternoon
Duration: 1.0 hrs
Distance: About 6 miles.