Early Morning
Dave and I got there bright and early (8 AM) and wandered up on the Yellow and Red trails in the south end in search of the large fallen trees we were notified about result of the Bridgeport storm on June 24th) Sadly, we only saw one smaller downed tree (which we reluctantly cut - it was a bikeable up and over).
On the plus side, with Dave's assistance, we cleared the log that I noted (quite a while back) that was in the way on the Yellow Trail near the waterfall stream area.
Dave left at 10 AM and I re-entered the park on foot with other small TM projects in mind and a hope I'd find the fallen trees...
White Trail
Created a knick and channel to allow run off at a spot on the White Trail on the long descent, right after the Yellow Trail turns off. It always gets muddy here in the spring and after a rainfall. 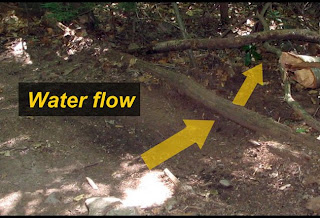 I did find the fallen trees. The first set are blocking the White Trail. Others are found in the northern section (map and details on the TTC site.) 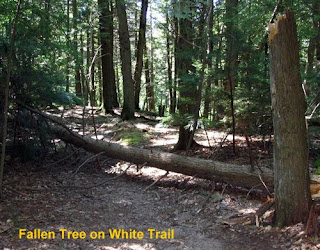 I trimmed a lot of plant overhang on the white trail and headed over to Yellow Trail climb north of the Fire Road.
Yellow Trail Climb (angry bees…)
The top of this Yellow Trail climb is a fall line that will easily erode without a little TLC. I added an S curve, cambering the curves and allowing two or three spots for water runoff as well. (My camera batteries had run out at this point so no photos...)
The downside of this project was I was continually attacked by bees and ended up with over seven bee stings on my hands and legs! Never saw a nest but they were an angry bunch...
Skunk Alert!
At a landmark huge rock on the yellow trail, three skunks were having a party and wandering out onto the trail. I froze and held my distance (only about 12 feet away!) praying that I wouldn't get sprayed... After about 5 minutes, they turned around and wandered back behind the rock and I gingerly passed them. They may call that rock home so others should be on the lookout around there...
Opened Small Offshoot
Lastly, I opened up the small offshoot trail (mentioned in my previous TA Report) by benching a bit more and raking near each end. This should help spur traffic on this short alternate path and cut down on wear and tear on the fall line it circumvents.
Recruiting Help…
The park was surprisingly empty although I met a few bikers and let them know about the TTC – all seemed interested in joining up to help on TM.
Posted by CT NEMBA at 11:26 AM