Waldo after the Storm: TM Report 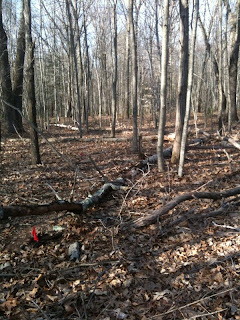 Date of Activity; March 19, 2010
Condition of Trail: Waldo is mostly dry, but there are still a few wet and/or soft spots.

Trail Ambassador Name: Paula Burton
Trail Ambassador Email: peburtonataoldotcom
Town: Southbury
Location: George Waldo SP
Trail (hiked, TM) : Where's Waldo
How did you use the trail? TM
What was the time of day: late afternoon
Duration: 2.5 hours
Distance: not far
Observations: I intended to get some blazing done. Darlene and I painted about 1/2 a mile in the fall, but the rest of it needs to be done too. I also intended to get one annoying blowdown cut. Instead I spent most of the time cutting a bunch of blowdowns left by last weekend's storm near the junction of the Hunter's Trail. Most of them were cedar, which is a very hard wood. Cedar is also very rot resistant and good to use for bog bridges. It smells sweet too. I did get some blazes done, but it was getting late and I needed to head out. I met some hikers who thought the trail was a great addition to the park. The trail should be good to ride this weekend.
Posted by CT NEMBA at 8:07 AM