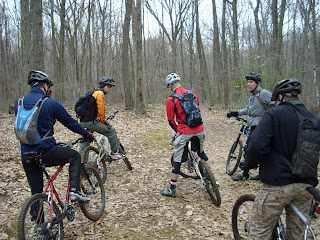 Condition of Trail: Mud here and there, especially in the low spots. Trails, where they are ridden a lot were nice, though. 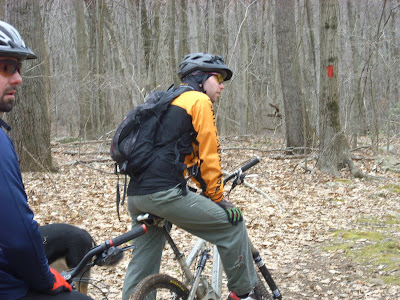 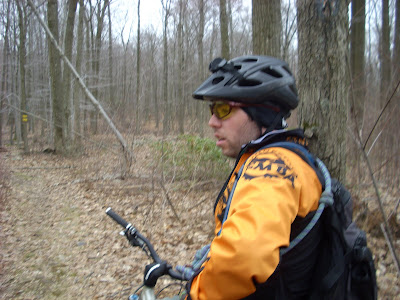 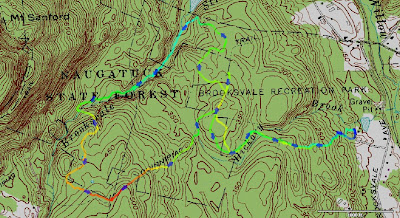 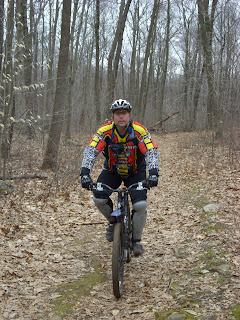 How did you use the trail? Mountain Biking
What was the time of day? Noon 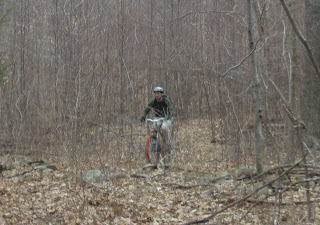 Encounters & Observations: 5 newly trained CT NEMBA Trail Ambassadors, and three more from years gone by, started up the Red Trail at Brooksvale Park and by half way up the climb we already lost one. It might have been his first ride of the new season and it just wasn't happening for him today. The rest of us continued the climb where we regrouped at the four corners. The lead pack of riders missed the next turn into the forest and had to back track only to learn that someone in our group had a mechanical. Hey, it would not be a good Trail Ambassador Training ride without at least one mechanical. Unfortunately, Chris' rear hub blew and luckily for him it would be mostly a downhill ride back to the lot so no real walk of shame for him! 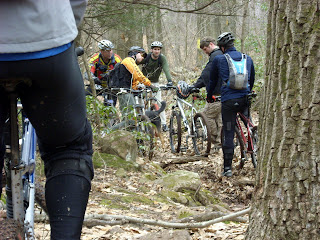 At the stream we lost two in the group who blazed on up head but didn't cross the stream as it was intended. I learned personally that the Brooksvale Stream was really cold when I took a bad line at the ford and had to dab! We found the two missing riders and then rode up the stream trail to the Croamie.
Posted by CT NEMBA at 6:16 AM

I rode Brooksvale last Thursday and found it to be exceedingly easy to get lost in this time of year. The leaf cover makes it difficult to see the trail and they all look alike. It did seem as though there were some new blazes marking trails, and some trail maintenance done in a few areas. Overall a good spring ride, but it needs to dry out in spots.

Pete, always good to hook up with somebody the knows the trails, check out the rides boards at Crankfire.com or Bikerag.com and see if anyone wants to give a tour.

Hard to get lost in there, though, because no matter what direction you go, you will mostlikely hit a development. Also, I think Mt Sanford is pretty evident so I wouldn't head in that direction.

You are right, it is pretty much impossible to get entirely lost in Brooksvale. Just easy to get turned around such that you ride in circles or end up having to backtrack once you've ended up in a development of McMansions.

I did not know about the rides boards at crankfire or bikerag. Thanks for the info.